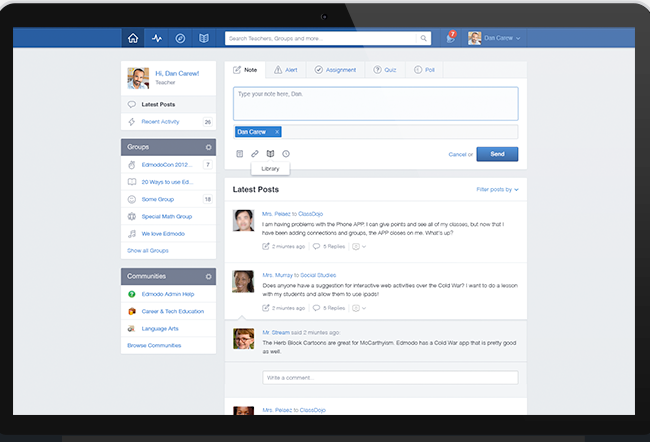 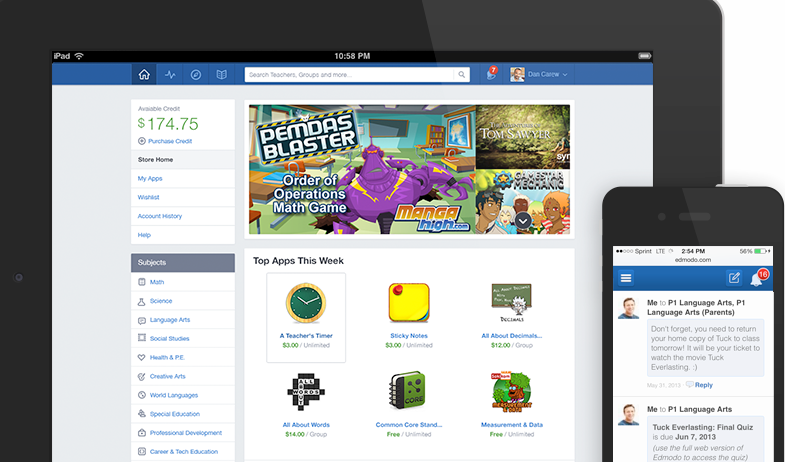 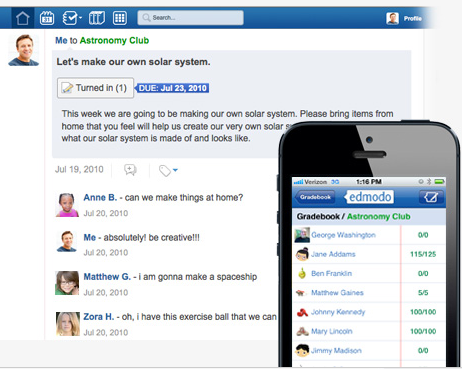 Edmodo is a very simple and easy-to-use software. It allows a dynamic interaction between the...

Edmodo is a very simple and easy-to-use software. It allows a dynamic interaction between the teacher and the students, as well as stimulates the participation of the classroom in group discussions on topic topics for the subject.

Edmodo is a very simple and easy-to-use software. It allows a dynamic interaction between the teacher and the students, as well as stimulates the participation of the classroom in group discussions on topic topics for the subject.
Has everything that can be considered necessary to promote distance education aswell the e-learning, because it allows you to share all kinds of files either by uploading them to the cloud, sharing a link or writing on the wall.
it also allows the teacher to attach all the files and documents necessary for the classes, in such a way that the students can access it at any time and in any place.
Last but not least important, edmodo allows the teacher to perform exams virtually, both with time limits and without timing.
I used it during the 4 years that I studied my university degree.

I think that edmodo needs an update to the design of the interface, because it looks a bit sober and outdated

Emodo, allows to maintain a communication between students and teachers

The experience I have had with edmodo has been quite good, it facilitates communication in a...

The experience I have had with edmodo has been quite good, it facilitates communication in a certain way, it is easy to make deliveries either of students in school, university, postgraduate, among others. I like it but I think that it should improve in some things

Edmodo is a very complete virtual platform, allows a communication between teachers and students to be established, in the case of teachers they can send activities to the students, in the same way they can set the delivery date, it is easy to have a clear visualization of the notes that each student takes.

Students through emodo can visualize the classes if they are uploaded power point presentations or documents of interest, they can also solve when not having face-to-face classes and have virtual evaluations, their interface is easy to interest.

I quite like that it is similar to a social network, you can place an avatar and even your related information

It is a free tool so it is important to make the most of it, it is always in continuous improvement, which reflects how good it can be with the passage of time.

From my experience, I think it is usually a point against this platform does not have a chat window, that is, teachers and students can not communicate quickly between them, it is necessary to send a message, it is not possible to visualize among students who are online or not, something that does happen with other platforms similar to this, should be an improvement in the future

I was the first user and the one who introduced Edmodo to our school. After one year, the entire...

I was the first user and the one who introduced Edmodo to our school. After one year, the entire English department uses Edmodo as a suitable LMS: it allowed all students (who had iPads) to register their own accounts and we were able to disseminate handouts, tests, and assignments quickly. A benefit was the large community of educators globally. Save for the frequent tutorial centre advertising posts, most were very helpful particularly when I stumbled on the seemingly unsolvable.

However, my experience degraded when I began to see what was annoying at first but eventually became inconvenient.

Inconvenience #1: Photo Replies. Students would take a photo of their question and post it (publicly or as a private message to peers/teachers). However one would not be able to reply by attaching a photo or image. As a workaround, I would need to start a new thread in order to reply with a photo.

Inconvenience #2: Library Filenames. Edmodo tends to automatically edit filenames. While I appreciate having an online library for students to access, filenames would be edited: spaces became underscores, capitals became lower cases. Perhaps this was a personal inconvenience, but what do others say?

Inconvenience #3: Library sorting. It would be nice to be able to sort the files alphabetically or by publishing date. So far it seems to display the files randomly.

Inconvenience #4: Data permanence. Once uploaded, files are not deleted. Even if files were deleted in the library, evidence suggests they are not deleted from the Edmodo server. Occasionally I upload a file but notice an error later. Upon "deleting" the file from the library, uploading another file with the same name would see a "1" appended to the filename.

These suggestions were sent to Edmodo on 22/09/2015. Since then, I have received no reply from them and have moved my students to another "LMS". One that solved inconvenience #1. This new one is more like a messaging board than an LMS, so to solve inconveniences #2-4, I reverted back to Dropbox.

I manage knowledge quickly and fun

I manage knowledge quickly and fun

The communicative dynamic, generated in social networks, is almost equal to that which occurs in the day to day of any individual. One of the most important characteristics of this process is that while the individual is circumscribed to a specific environment, the networks connect it to almost everyone. Therefore, Edmodo educational network allows the global connection with people and organizations around the world, making available a large amount of resources for the development of its potential.
The platform is presented in a very intuitive way, and nothing complicated, which facilitates the management of knowledge, quickly and friendly. Its unlimited storage capacity, allows the integration of many resources: create, assign, and schedule was never so simple. and on a single platform, which, being integrated with Google's tools for Education, like Microsoft's, guarantees the development of the potential of teaching, which can be reinforced by the whole family.

The contemporary platforms have expanded the concept and possibilities of the classrooms, with which, they must make of these, more than a physical space, a great tool that allows to develop the learning, at all levels. For that reason, the platforms should have the possibility of being modified easily, making them more striking, personalized and with more current designs. In the same order of ideas, it is expected that the versions of the smart devices are the most similar to those seen in the PC, in this case, we must improve their performance.

Edmodo has proven to be useful, resourceful and even fun to use, with almost no downsides. I...

Edmodo has proven to be useful, resourceful and even fun to use, with almost no downsides. I believe all instructors/teachers/professors/students should give it a try.

My answer is coming from a student's perspective, because I have not used Edmodo as a teacher or as an Educational Institution:

Edmodo is one of those applications that you can hardly find anything negative, it just probably misses certain features that could enhance the user's experience.

It has a simple and familiar dashboard that closely resembles Facebook and LinkedIn,

The Backpack system is linked to Office 365, it lets you drop by documents as long as it is part of the Office suite, although it also accepts archives in PDF format. This is very helpful when it comes to deliver certain assignments.

If you miss a class, the teacher is able to send a video of the lectures given that day.

It easily allows you to stay in touch with your teachers/professors (As long as they use Edmodo regularly).

Teachers/Professors are able to massively facilitate to all students handouts and articles of interests through Edmodo's Folders.

There is no premium version, you get all the features for free.

It lacks a live chat group, or a private messaging feature which could be very useful.

It has a lot of ads, although any Adblocker seems to get the job done. But I encourage people to leave the ads there, this will help Edmodo grow.